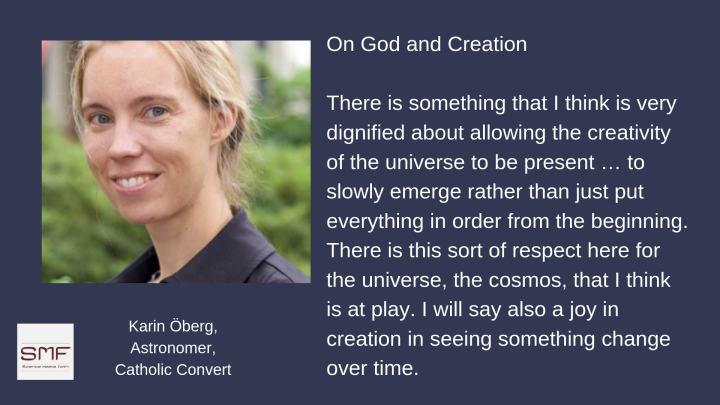 Karin Öberg is a Professor of Astronomy at Harvard University. Her specialty is astrochemistry and her research aims to uncover how chemical processes affect the outcome of planet formation, including the chemical habitability of nascent planets.
Dr. Öberg left Sweden for Caltech in 2001, where she matriculated with a B.Sc. in chemistry in 2005. Four years later she obtained a Ph.D. in astronomy, with a thesis focused on laboratory astrochemistry. In 2009 she moved to the Harvard-Smithsonian Center for Astrophysics with a Hubble fellowship, focusing on millimeter observations of protoplanetary disks, and left in 2012 to join the University of Virginia chemistry department. In 2013 she returned to Harvard as an assistant professor in astronomy and was promoted to full professor in 2017.

Öberg said she rediscovered her Christian faith while in the United States and determined there was no conflict between the religious values she cherishes and her research into how chemistry and physics interact during star and planet formation.  She became Catholic in 2012 and joined the Board of the Society of Catholic Scientists, explaining: “My biggest motivation is for the students so they don’t think they have to choose to live their scientific vocation separate from their faith.”

One thought on “Scientists reflect on their faith (VIII)”

This site uses Akismet to reduce spam. Learn how your comment data is processed.